This investigation, if required, is performed at an alternative provider (not in-house).

An ultrasound of the carotid artery can be done for two reasons: firstly, to act as a window to the rest of the blood vessels, to spot early signs of hardening of the arteries, and to assess the thickness of the inner part of the artery (the intimal-media thickness) which is known to be linked to the risk of future heart attacks and strokes. The results of a carotid artery ultrasound scan can be used to help guide drug treatments.

Secondly, if a very narrowed Internal Carotid Artery (ICA) is found on carotid duplex scanning , then treatment with tablets may need to be augmented with either Carotid Endarterectomy (CEA) or Carotid Artery Stenting (CAS).

What happens during Duplex scan

You will be asked to remove any clothing, jewellery, or other objects that may interfere with the scan and you will be given a gown to wear. Whilst lying on a bed a clear gel will be placed on the skin at various locations on the carotid arteries. The probe will be pressed against the skin and moved around over the area of the artery being studied. You may hear whooshing sounds which is the Doppler representation of blood flow. Both sides of the neck will be examined. 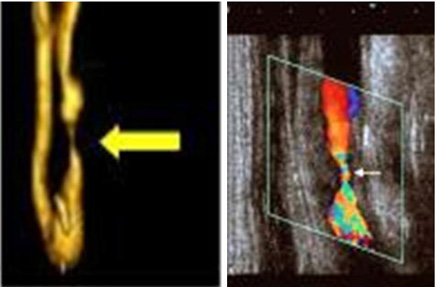 Carotid narrowing on MRI and ultrasound.

What happens after a Duplex Scan

After the examination you’re images will be analysed and a report will be produced. Your cardiologist will then be able to put the findings into context.

One treatment of narrowing’s in the carotid arteries.

When Carotid arteries become blocked there is an increased risk of stroke, the third most common cause of death in England and Wales.