A permanent pacemaker is a small electronic device with a  battery and generator, connected to several electrical leads.

The leads are placed into the right ventricle (main pumping chamber) and right atrium (priming chamber). They are then connected to the pacemaker generator, which stimulates the heart. Modern pacemakers are able to detect an increase in body activity and accordingly, increase the heart rate in a physiological (natural) way. 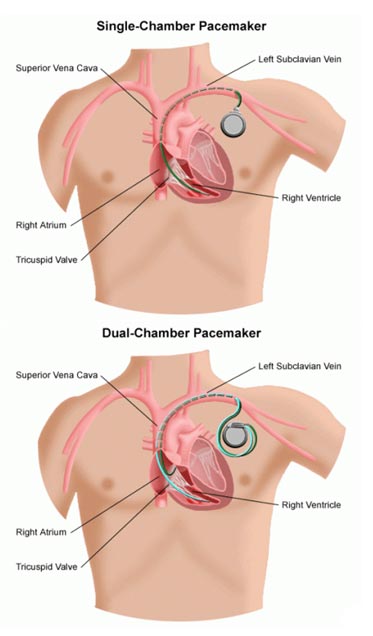 Do I need a Pacemaker?

The heart normally has a regular heartbeat, generated by its own internal pacemaker system (see heart pacemaker system). On occasion, this can be affected either by progressive fibrosis and degeneration in old age, or following other conditions, such as aortic valve disease or following aortic valve surgery. Certain individuals are born without a normal working heart pacemaker. Either way, this “heart block” can present in a number of ways. In these situations, patients benefit both in terms of their symptoms and may improve life expectancy, with the implantation of a permanent pacemaker.

If your cardiologist decides that you require a permanent pacemaker, you will be admitted to hospital for a day and a night. You will be taken down to the operating theatre, where your skin will be cleaned with a sterile solution. You need to let the cardiologist know if you are left or right handed as this will decide which side the pacemaker is placed.

You will be covered with sterile surgical drapes, leaving a small window over the shoulder by the collarbone, where the pacemaker will be implanted. The cardiologist will freeze the skin and deep tissues with a local anaesthetic solution. He will make a small incision (about 3 centimetres), just below the collar bone. This will allow him to gain access to the large veins, which lead directly to the heart. He will puncture the vein and insert a tiny plastic tube. Through this tube, using X-ray direction, he will insert the pacemaker leads, one into the apex of the right ventricle and one into the corner of the right atrium. When the leads are positioned, he secures them firmly with sutures and then makes a small pocket under the deep skin structures where he implants the generator. All the leads and generator are secured with sutures and then the wound is carefully closed, giving a good cosmetic result. Afterwards, you are returned to the ward, given antibiotics and have a chest x-ray as a precautionary measure only.

The next morning, you will be reviewed. If the wound is fine and you are well, you will be allowed home. The pacemaker will be interrogated electronically by the cardiac technician on a regular basis to ensure that it is working satisfactorily and that all of the parameters are in their optimal setting. Each person’s pacemaker is tailored to their own requirement in terms of their activity, age and particular underlying conditions.

A pacemaker generator now would last at least 5-7 years, depending on how well it is programmed, often much longer. We can tell when the pacemaker battery begins to run low, when we interrogate the device with the computer on a 6-monthly or annual basis.

Pacemaker insertion is very safe. However, like any surgical procedure, there is a small degree of risk: puncturing the lung or heart tissue, infection and bleeding around the wound site.

Atrial Fibrillation (AF) is the most common rhythm disturbance. However there are lots more. Use the following section to find out more.