AF Ablation describes the procedure of using catheters (much like angiography) to cauterise areas of the heart which are thought to be the substrate or cause of AF. It is a technique which is developing quickly and does offer the possibility of a cure for AF.

Do I need an AF ablation?

The governments NICE guidelines publish recommendations for doctors regarding who should have ablation therapy for AF. Percutaneous radiofrequency ablation is a treatment option for patients with AF who have symptoms, and is used if anti-arrhythmic drug therapy fails or is not tolerated. However, it may not remove the need for warfarin to prevent stroke.

Percutaneous radiofrequency ablation is a minimally invasive procedure that is usually carried out under sedation. You will need a transoesophageal echocardiogram (TOE) to ensure there is no clot in the heart before starting the procedure. A catheter is inserted into the femoral vein and advanced into the right side of the heart, using X-ray fluoroscopic guidance to ensure correct positioning. AF usually starts in the left atrium and so a needle is used to punch through a lining of tissue to get from the right atrium to the left atrium. An attachment at the tip of the catheter sends out radiofrequency energy, producing heat that damages the targeted area of the atrium. Electrophysiological testing is undertaken before the procedure to identify and map the source of the abnormal electrical signals. Advanced imaging and mapping techniques that do not require fluoroscopy have also been developed for use in this procedure. 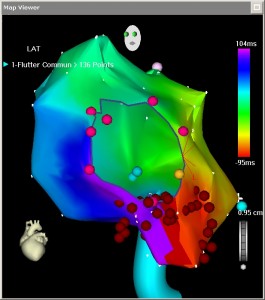 “Map” of the Left Atrium generated during ablation.

There are risks which can be minor but at other times can be very serious. Perhaps 2-3% of patients may suffer a serious complication such as a blood leak around the heart (tamponade), a stroke, nerve damage, pulmonary vein narrowing or a hole forming between the atria and gullet (atrio-oesophageal fistula).

This term describes several other types of fast heart rhythms that are typically not  dangerous, but can cause symptoms of palpitations, fatigue, or shortness of...

A harmless rhythm, sinus tachycardia is a normal increase in heart rate that happens with fever, excitement and exercise. It rarely requires treatment aside from...

Atrial flutter is similar to AF, characterized by a rapid heartbeat. Instead of rapid disorganized signals in the atria, however, AFL is caused by a...

Atrial fibrillation (AF) is the most common sustained cardiac arrhythmia in the UK with more than 46,000 new cases diagnosed each year